New ROVER 25 Project for my Dad

New ROVER 25 Project for my Dad

I have just added another shed to add to the collection of non-working cars.

My Dad has been driving the Mrs' Mk2 25 Derv but since my 75 decided it
no longer wanted to retain its clutch fluid so I now need the 25 Derv for
work, so the hunt was on for a cheap runaround for my Dad, I didn't look
too far afield as I wanted something I know my way around so the first
search was for a 25.

I found a 25 local to me and the price was right, haggled off £200 form the
asking price and asides from looking tatty its solid, seems it is a great time
to pick up a decent spec 25 as I got this for £300 !


Good Points:
Feels nice and tight, better than the Mk2 25 i'm using for work, doesn't
rattle as much and feels better made, reminds me of my 25 that I have
owned for the last 13 years before I 'improved' it, has A/C but it doesn't
work but thats to be expected, will just need a regass.

Bad Points:
High Clutch Pedal
Rough rattle can paint repairs
Dent in the tailgate above the badge
Associated Dents and Scratched
A/C not working
Sealed up sunroof
De-laminated Rear Plate
Overspray on the front indicators and numberplate
Free BBQ Sauce and Chocolate on the rear seat
Only a small amount of coolant in the bottle
Tweeter and door handle trims missing
Few Dash bulbs out
Other small jobs required


This is the bootlid damage, its causing water to leak into the number plate
lights, I will remove the handle and attempt to pop the dent out then I will
reattach the handle with a bead of silicone after treating the rust and just
splashing some black paint on it, doesn't need to be neat, just halt the rust
and stop the lights corroding further as they are quite blue.

While at the dealership, (car was a trade-in) the first thing I checked was
the coolant, it was VERY low, they kindly topped it up for me and with the
heater on full I fired it up and it runs smooth, I removed the bleed screw,
the coolant flowed out, got it warmed up and took the cap off the bottle,
no leaks, took it for a quick 1/2 mile run, top hose got hot, bottom hose
did get warm eventually, fan kicked in so will just keep an eye on the levels
daily while my Dad uses it, going to buy in a Gasket and Bolt set just for
standby, drove it 20 miles home, checked, the level has not dropped.

Any suggestions to the probable causes to the issues or ideas to fix them
please let me know, i'll update the progress as I go, the aim is to get it on
the road in two weeks, just need to know which 200mm clutch I need and
how many teeth, 17 or 18 ? Or how do I find out as it needs ordering.


Got up early to get cracking, the car needs a major internal and external
clean but I really could not be bothered, just wanted to get the screw
drivers out and raid my spare parts stash to fix the niggles.


Front indicators
I replaced the drivers side lens and replaced the bulb, major paint over
spray and it was generally dingy, the passenger side cleaned up with
well with brake cleaner.


Number Plates
I removed the front plate, it was covered in over spray, it was original
plate as was the rear but the rear one was badly de-laminated and
looked awful so that has been removed and replacements have been
ordered.


Parcel Shelf
The shelf had a broken lug and it looks like it has been like that for
some time and it was sagging into the boot, it has ended up bent
into an odd shape so I have replaced it with the old shelf from my
25X, its been in the garage for 12 years *laughs*.

WIRING WOES
One of the previous owners has probably fitted an upgraded sound system
at some point as there are signs they have removed it before selling the
car on but they have done it badly and slapdash, only one front speaker
works and the door tweeter trims and handle covers are missing.

They have wired LED's in the footwells and tapped into the side light
feed but they have used selotape, they have now been removed and I
have soldered and heat shrinked the wiring, the bootlight wiring was
also cut to bits and the light itself was missing, I fixed the wiring and
fitted a switched lamp unit with a 21w bulb as the 10w doesn't cut it,
plus its switched so you can use it as required.

Radio & Speakers
The original radio was long gone, in its place is something that has just
been thrown in to fill the void, some random Panasonic jobby with no
trim surround, I took it out and threw in my 25X's original proper factory
ROVER Blaupunkt, looks miles better, sounds great through the one
working speaker *laughs*.

I will be fitting the original rear speakers out of my 25X, they are still in
place as I use them when I remove the MDF shelf with the JBL meadly in
them but they are redundant 99% of the time so I will make use of them,
after this I just need to investigate the drivers speaker, fingers crossed
it is just a wiring fault.


MISC Dash Bits
Asides the head unit I also fitted a heater speed control knob, it was
missing for some random reason, the metal clip that sits in the knob that
grips the spindle rod was there so I got it off and fitted it into a spare
knob that didn't have one.

Speed 3 is not working so that will be a job for next week, I have one
resistor kit left so happy days.

The cigar lighter insert was missing, again the parts bin was fruitful, I
fitted a spare, pushed it in and tested it, the thing got to temp then flew
out into the passenger footwell *laughs*, as the centre console will need to
come out when I replace and fit and new gear gaiter as the original one is
tatty so I will fit a 12v socket as no bugger smokes these days, shame
really as the bulb still works, thats usually the one that goes and never
gets replaced.

Lights and Bulbs
The bulbs didn't work in the following items, I have fixed them all.

Front and Rear sidelights, front N/S and rear O/S were out, I have loads of
LED bulbs lying about so I fitted 9 SMD chip Warm White 501's to the front
lights and 19 SMD chip Red LED bulbs to the rear, looks OEM but nice and
bright.

Boot light (The light itself was missing)

Main Interior Light (No bulb fitted, was probably LED and removed)
I fitted a nice bright cool white 48 LED panel I had lying around.

Numberplate lights, they were wet inside from the dent in the bootlid
letting in moisture, lots of blue corrosion on the contacts, only one was
working so I cleaned up all the contacts, dried out the seals and wiped
the lenses, I popped in a couple of used conventional bulbs, I will pop
in warm white LED's once the dent is fixed.

The Clock bulb, Hazard Switch Bulb and Front Fog Switch bulbs were all
out, I had loads of spare grain of rice bulbs left over from all LED switch
conversions I have done so I fitted replacements, I will tweak them more
over time but the dash fully lights now.


Weird Boot Lid Rattle
As it says, the lid rattled when you jostled it so I removed the internal
plastic trim [anel and I found a brass bolt inside, it was one of the 3
holding the wiper motor in place, I refitted it but one is still missing, it
was probably de-wipered or replaced at some point but I will find a spare
bolt in my fixings tubs but for now its solid.


MISC Bits
Under the bonnet is mint and very tidy, the fuel filter looks new and the oil
is a good colour, engine is well serviced as there are a fair few stamps in
the service book, the last one was 48k so it might be possible its not had a
service since 2012 and the last 18k, I will do a minor service next week
once the bits arrive, the airbox is in place and all the original clips are still
there so no induction kits have been fitted by the looks of it, I took out the
resonator tube, just coz I can OK !

The power steering and coolant labels were missing, I had spares so threw
some on, they look much better with them fitted.


MISSING TRIMS
Tweeter Covers (LeRich is on the case)
Front Door Handle Covers (Will dig out spares in my pile)
Door Lock Pin Trims (Need all 4, anyone help ?)
Passenger Seat Mech Lower Cover (I have one, somewhere)
Rear Parcel Shelf Lug Seat Metal Retaining Clip (Again anyone got one ?)
Most the boot carpet clips but I have spares


NEXT LIST OF JOBS
Where to start, lots to do but asides the clutch nothing major.

MAJOR valet, might do a separate thread on detailing the car just to see if
you can polish a turd, yes I know Mythbusters say yes but you know what
I mean *laughs*.

Grand job you're doing there, surprised you have time to post updates

He works all night, gives him something to do

Don't spend any more time, money or effort on it until you have checked out Matt's car:

Unless you don't like or are superstitious of, green cars

The 'almost' final update on this car.

I'm not sure of the spec but it does have turbine alloys, A/C and a Sunroof.

As for why it is getting scrapped, well most of the panels have damage, the drivers door window has failed for a
second time, the HG has been attempting to fail since we bought it, the coolant leak off the inlet manifold was
sorted but the gasket finally broke the oil has been bleeding out on the front of the engine.

The Gearbox seems to have 'lost' 1st gear, 2nd it vague, and finally it is constantly taking on water, through the
sunroof which I sealed up, and somewhere in the tailgate, the car smells rough now, full of damp, the mold has
been taking hold quickly too.

Its not like it is a rare car and the parts it is shedding will be put to good use, all the A/C parts will be going onto
my Cabby, the Engine, ECU, 5AS plus two fobs will be going into my new 25 Project.

Here's a few photos of the engine strip. 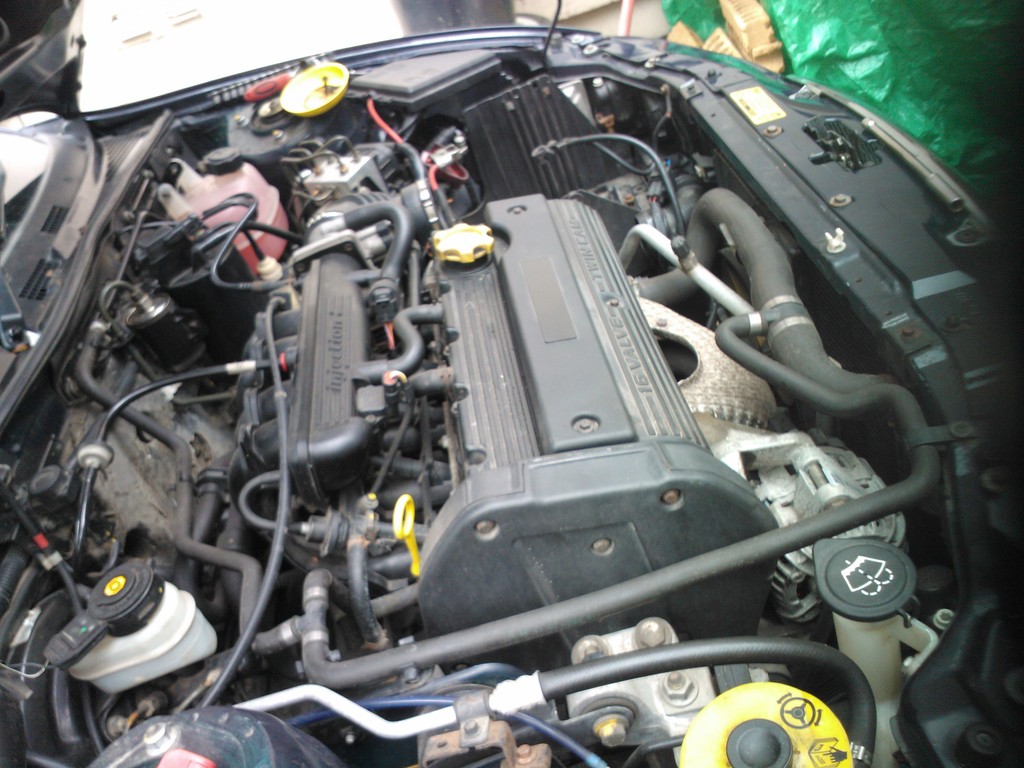 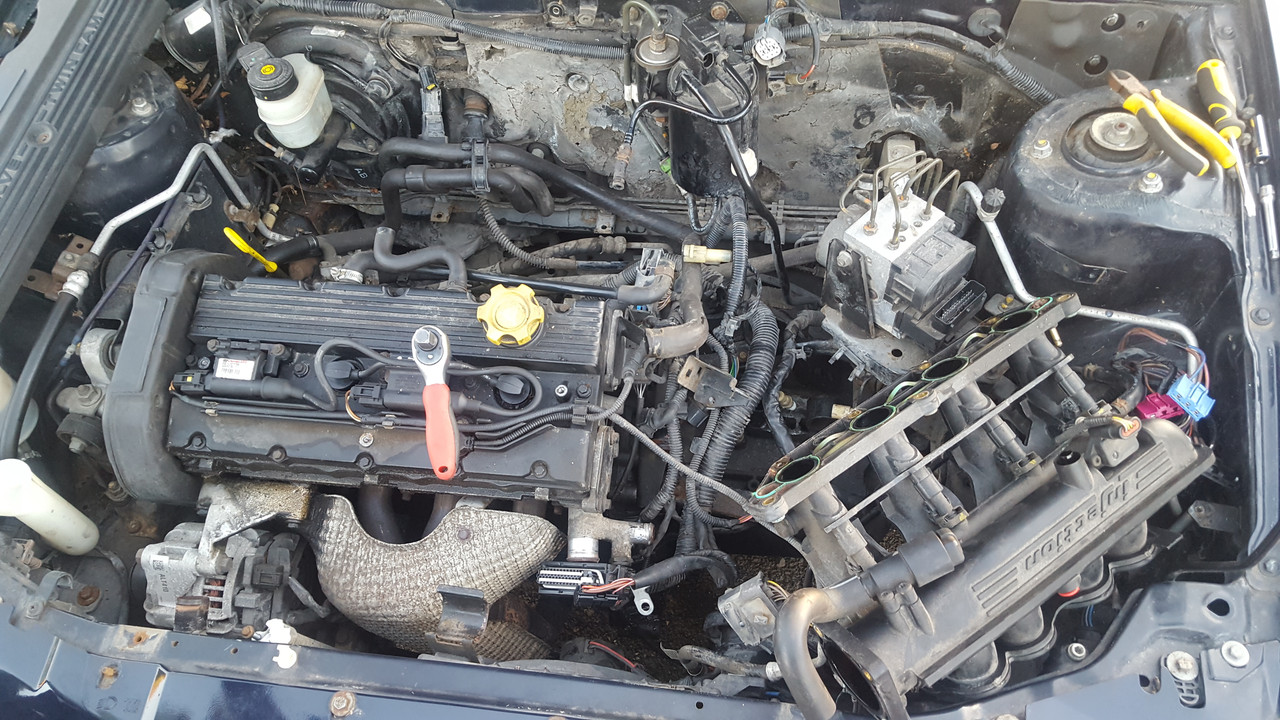 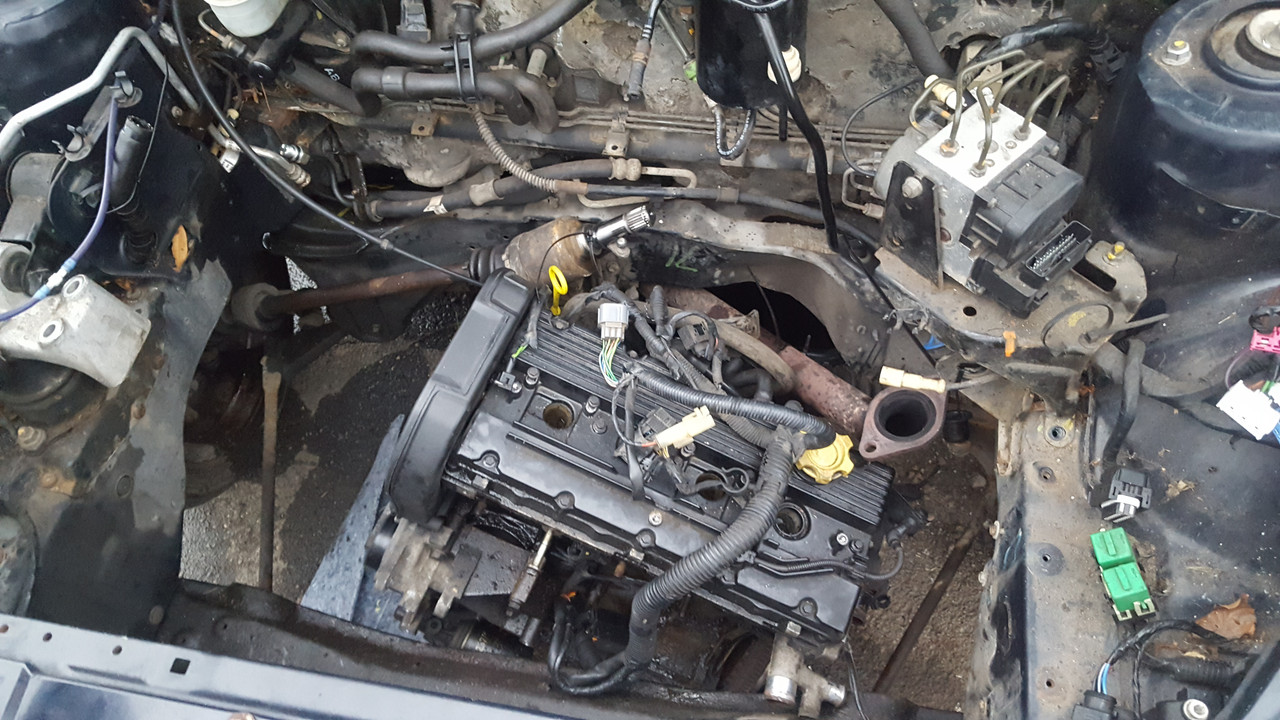 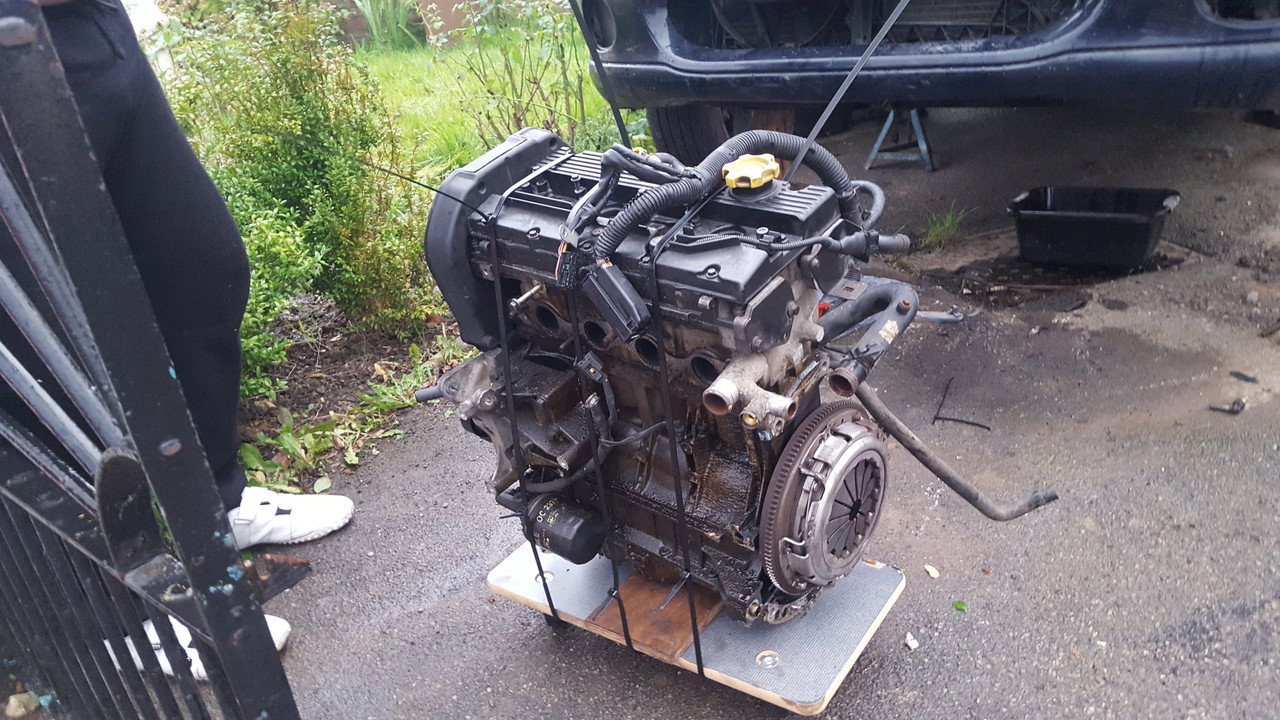 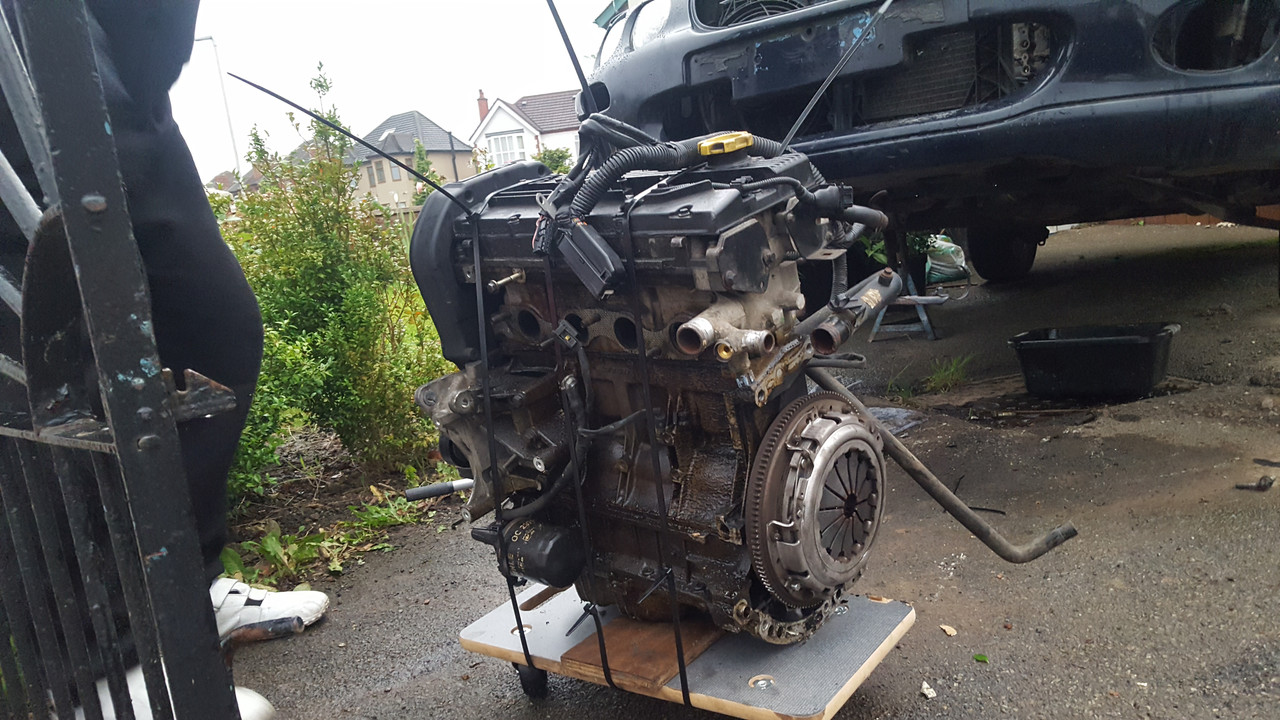 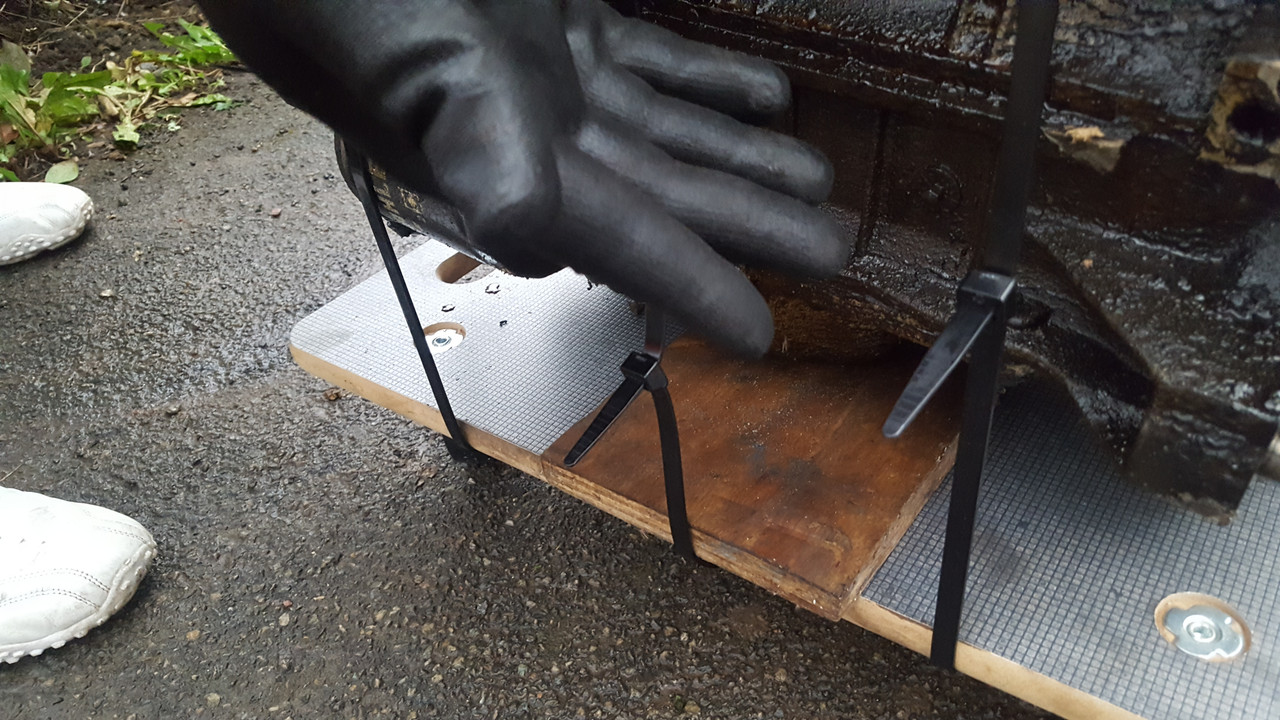 Must mean ste was involved


I have spent a few days stripping all the parts I could use in future projects off this car before sending it to
the scrappy, quite pleased with my haul, as you can see, there wasn't much left. 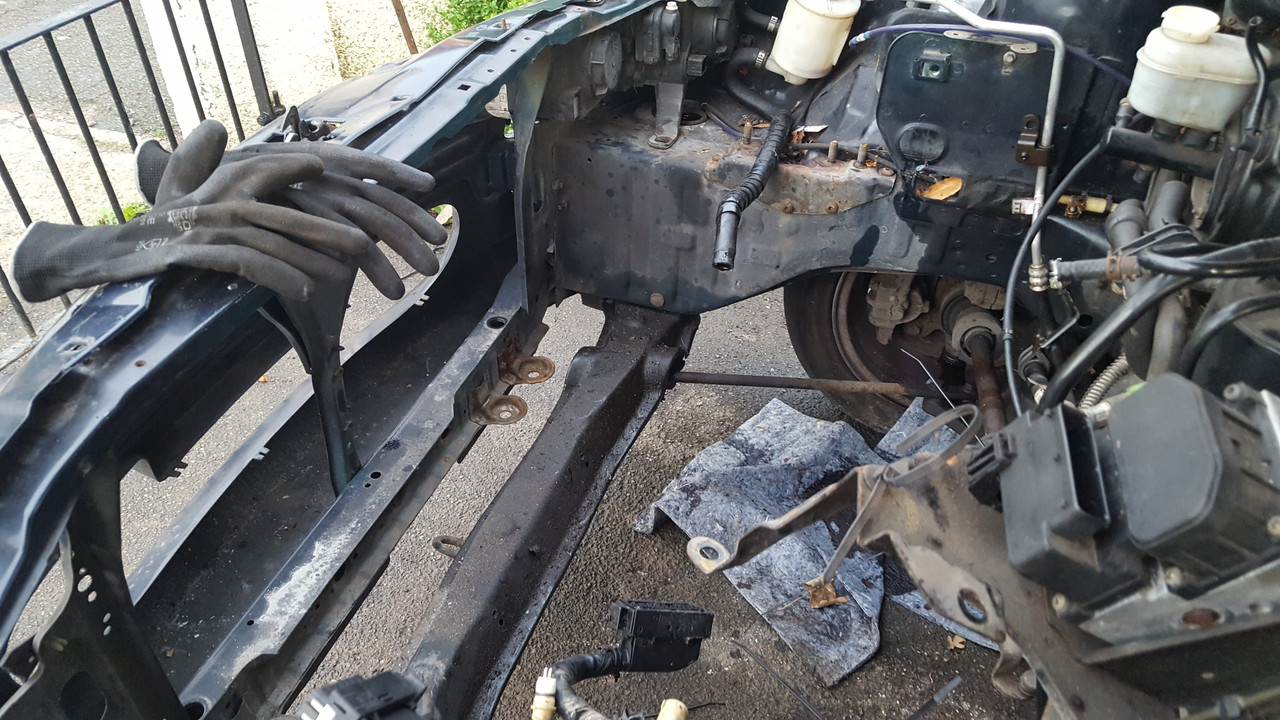 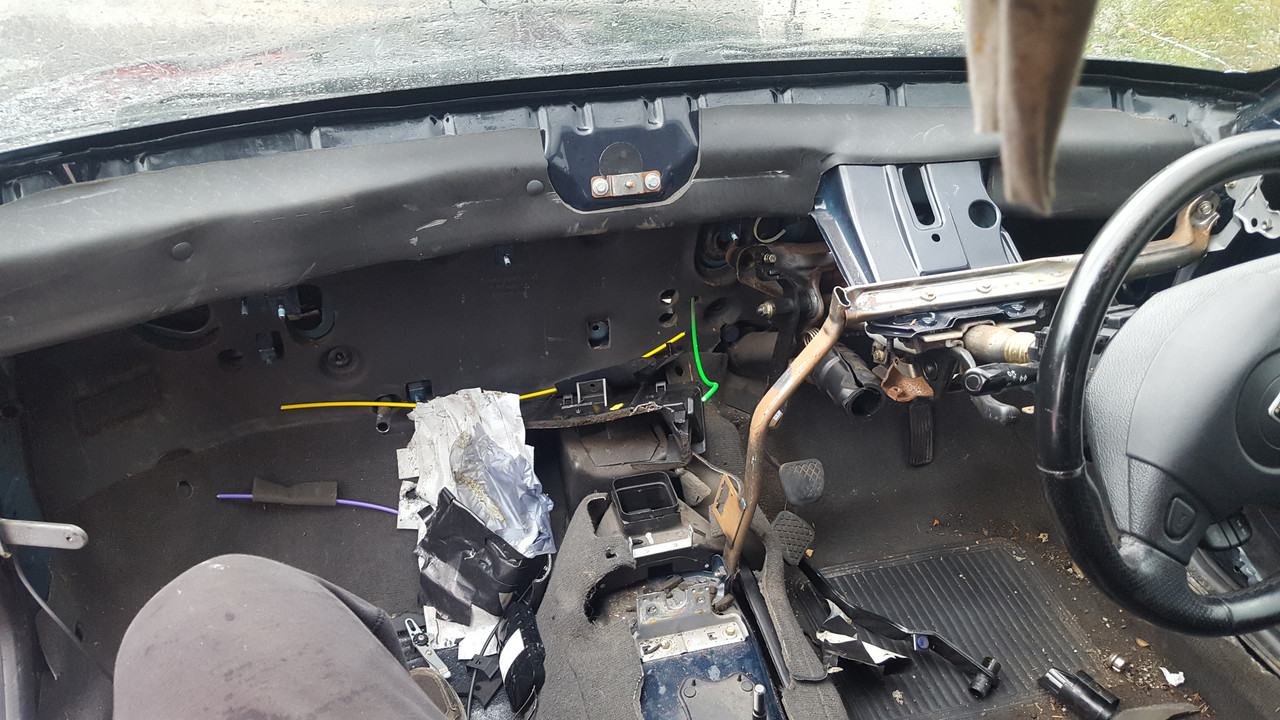 I got the full complete A/C system off it for my Cabby. 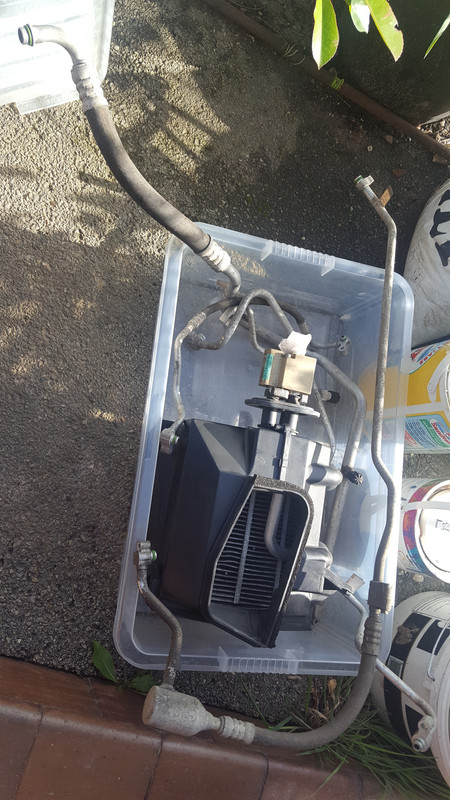 The full Engine and Dash Loom with the ECU, 5AS and Fuesebox. 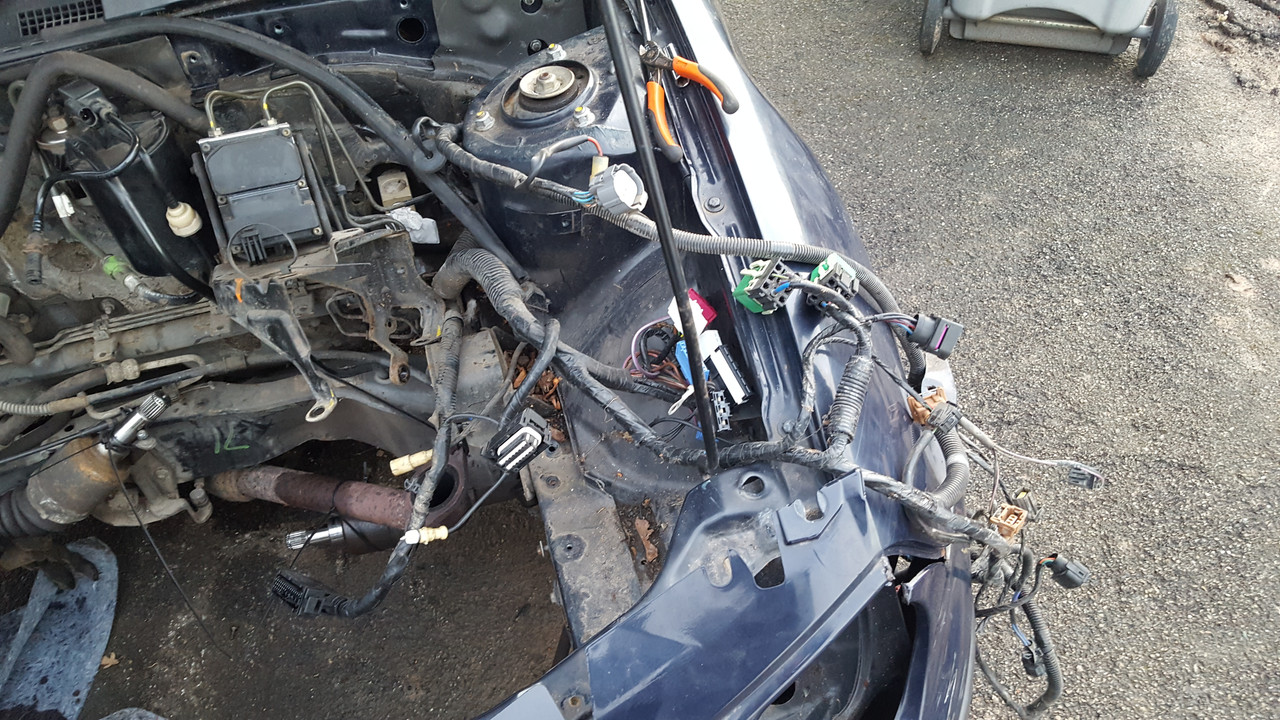 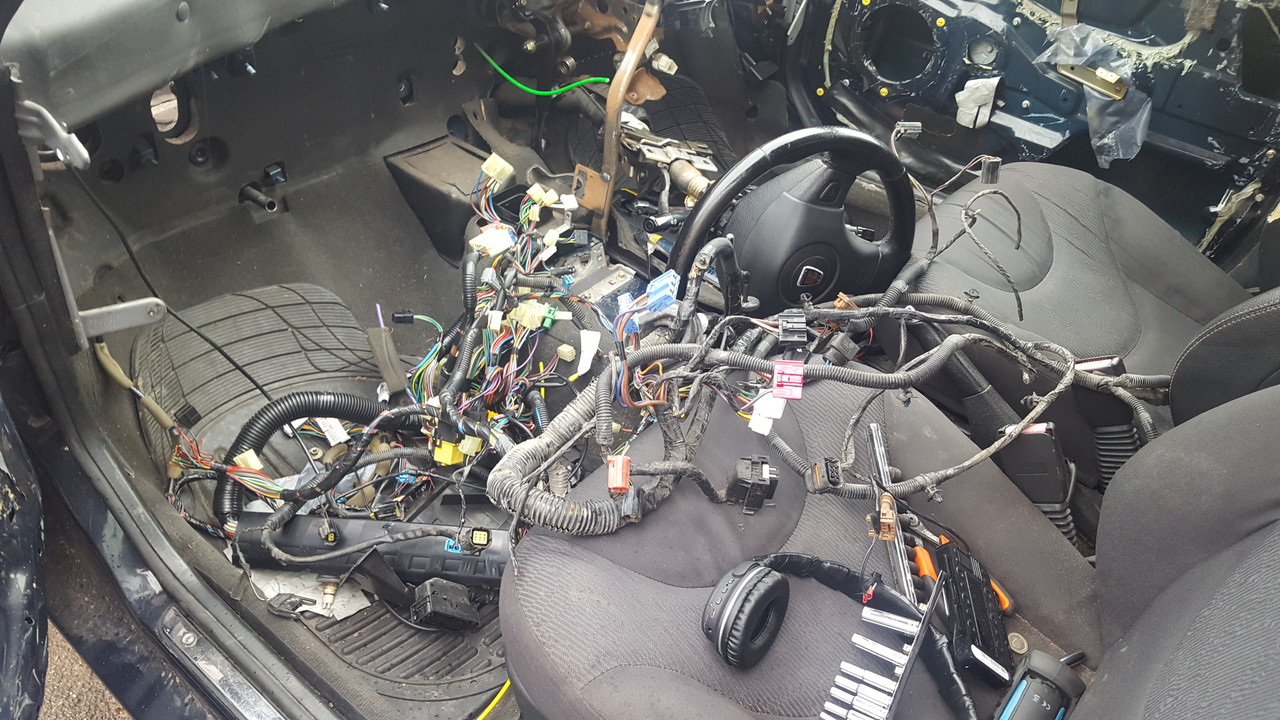 
Farewell Blue Turd, thank you for your service ! 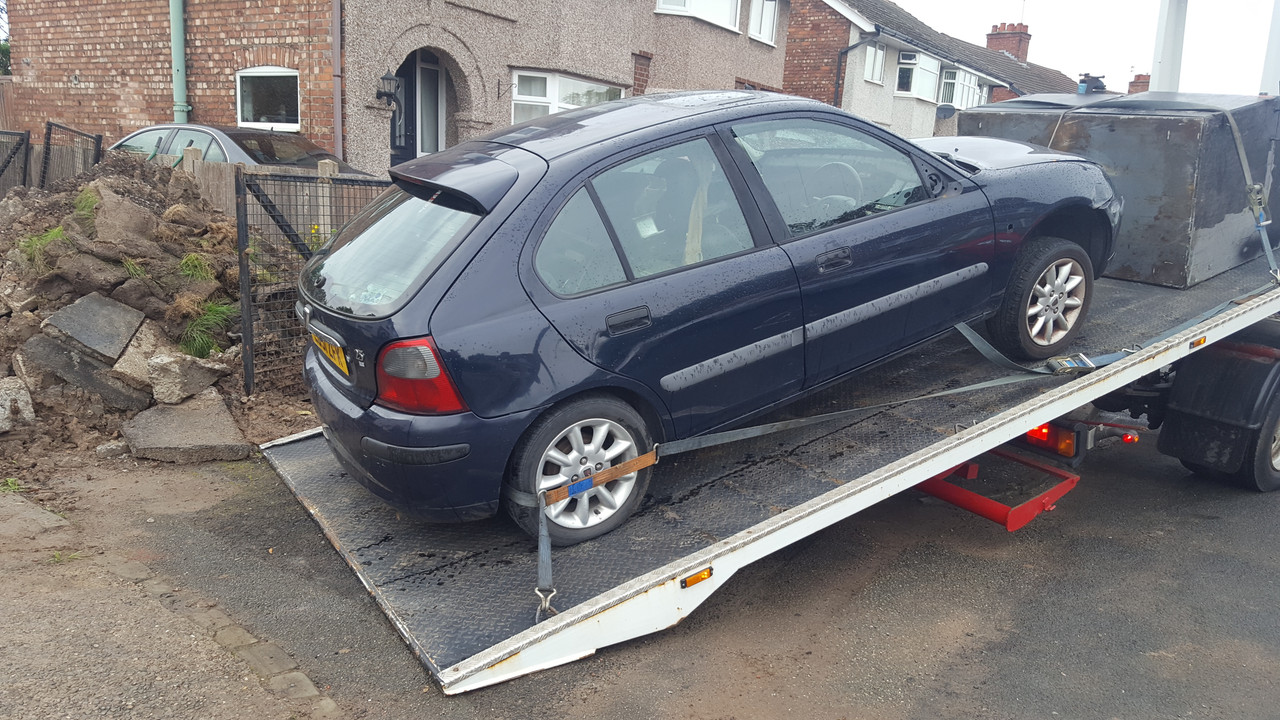