Post pictures of your car here. We want pics!

I bought a 25 last week with a misfire & running problem a couple of garages have been unable to resolve; threads below from the original owner’s son in law detail some of the investigations/measures taken.

I collected the car last Wednesday; a few “as it was” pictures from when I picked it up. 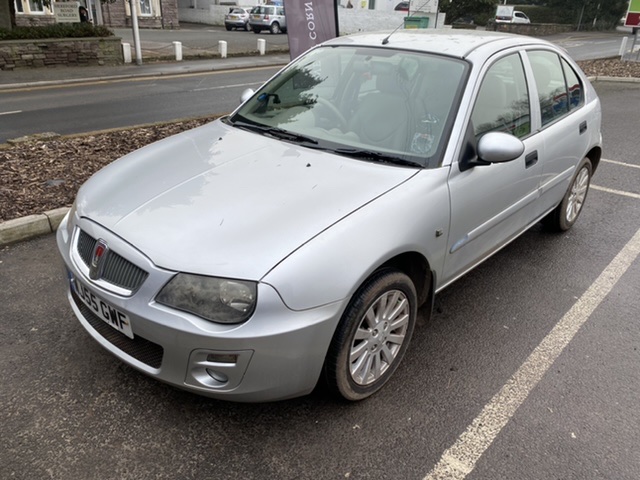 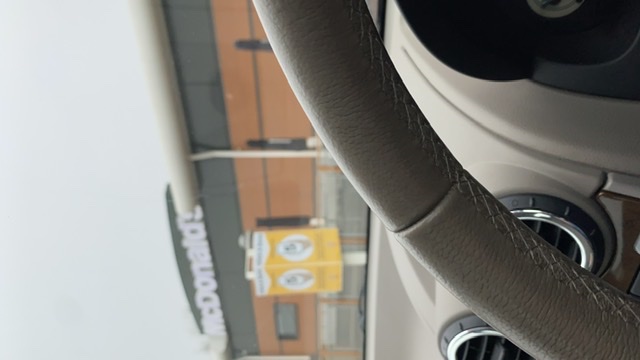 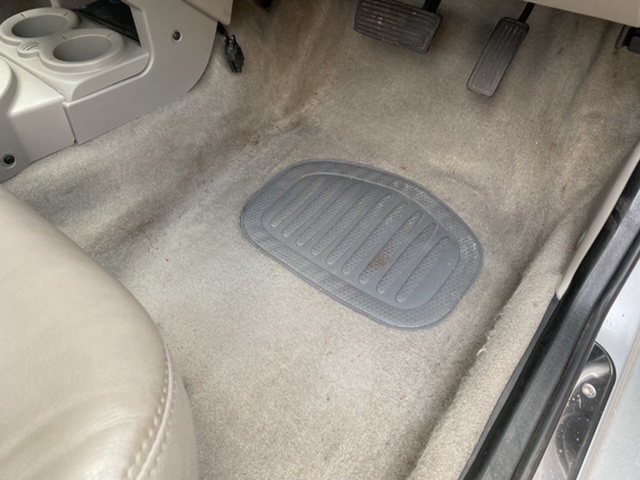 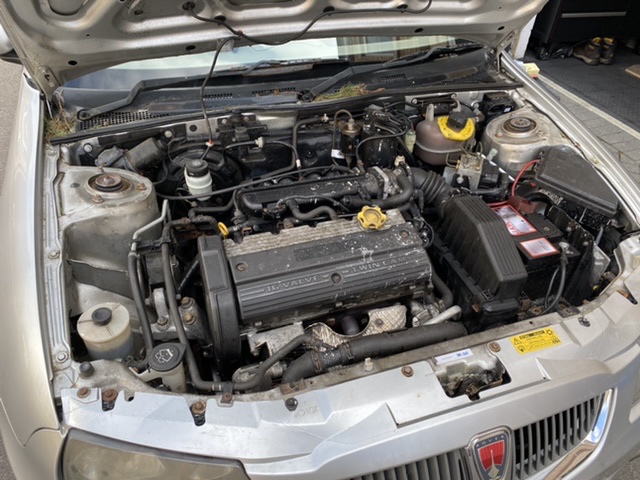 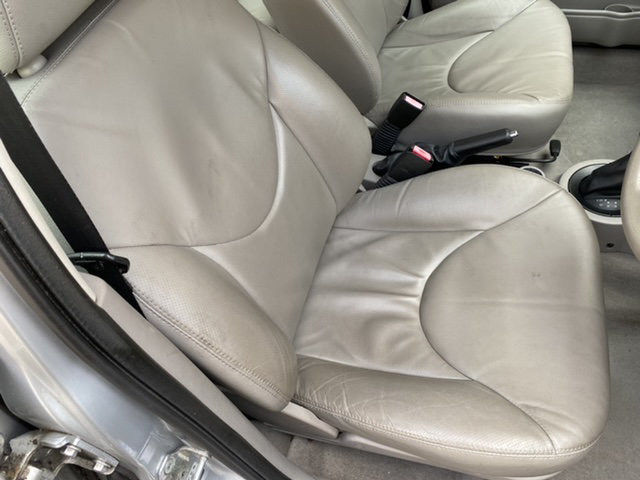 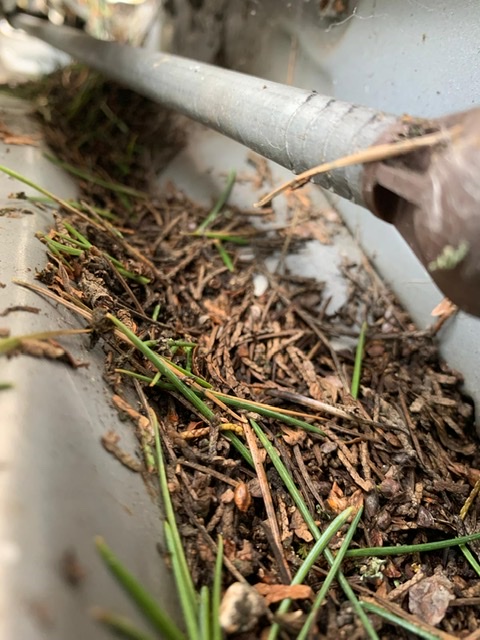 I noted the misfire & hesitation started pretty much as soon as the car reached operating temperature. Looking at the data fed back from the car’s ECU on my laptop, it was evident the car was running extremely rich all the time and the engine was being overloaded with fuel (evidenced by the fuel economy I later calculated to be an average of 22mpg!).

The multitude of faults I found logged (below) when I checked the car before I departed did not return; one however did, which was P0170 Fuel Trim-this relates an error in the adjustment of the fuel/air mixture delivered to the engine. I suspect a fair few of the faults were generated from the checks/work the garage conducted. 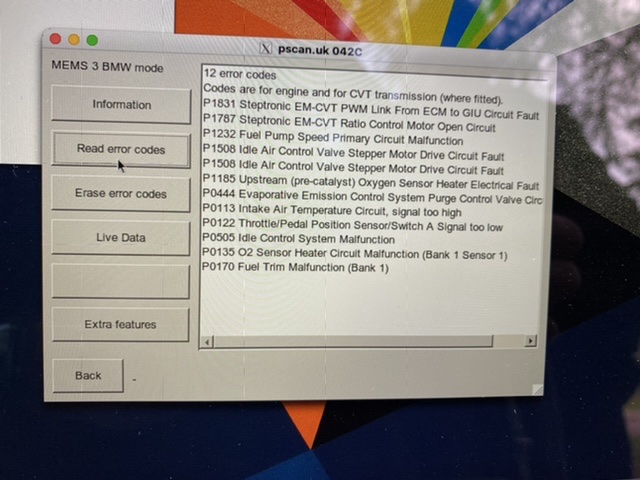 The main sensors relating to fuelling on the K-Series are the oxygen sensors mounted in the exhaust (there are two-one before the catalyst, which is the main one dealing with detection of how much oxygen is in the exhaust gases and thus the fuel mixture delivered to the engine, and one after the catalyst, which is a “check and confirm” sensor mainly based around catalyst efficiency) and the manifold absolute pressure (MAP) sensor, which detects as suggested the amount of air contained within the inlet manifold. Both of these have been replaced in the work recently done on the car.

If any of these sensors report incorrect or unusual data, the ECU’s decision making will be compromised, thus causing running issues. The signals from these sensors can also be corrupted by wiring shorts, poor earthing or electrical interference.

Anyway-delving further into the live data stream, one particular anomaly struck me-the data from the pre-cat O2 sensor. When the car is at normal operating temperature, the sensor should be returning values from 0.1v to 1.0v, and switching rapidly between these (the former being a lean fuelling value, the latter being rich). The sensor seemed to be stuck on values of 0.6-0.8v, telling the ECU to richen the fuel mixture. Testing the sensor at its plug with a multimeter confirmed this.

Disconnecting the sensor made the car default to a “base” fuelling map; whilst this made it sluggish, it made the misfire much less pronounced and the engine run more cleanly, so it was able to be driven much more easily.

On Friday I conducted some further checks-I found upon removing the ignition coil packs & HT leads one of the lead terminals had broken up inside the coil pack-the lead & coilpack on the left are the defective ones, you can just see the remnants of the lead stuck inside the coilpack.

I also rechecked the camshaft timing-bearing in mind the new cambelt & water pump fitted last October, I wanted to be sure this had been done correctly-the camshaft timing was all OK, fortunately. It’s not unknown for these engines to be set up after a belt replacement with the camshafts a tooth out and the engine still to run, so it’s a worthwhile check. When taking on someone else’s unsolved/incomplete work I bear in mind what’s been done, but don’t take for granted it’s been done correctly (with due respect!) or that the parts that have been fitted are of required standards or are not defective. 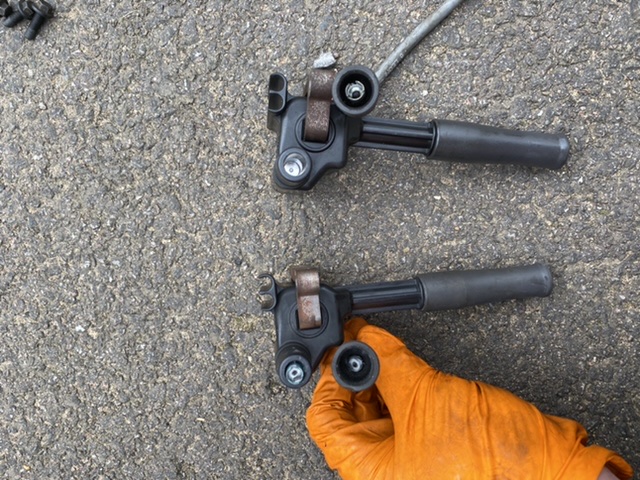 The spark plug gaps were also miles too small, measuring 0.6mm rather than the 0.9-1mm they should be-it looks as though the electrodes on the plugs had maybe been bent manually to achieve this? 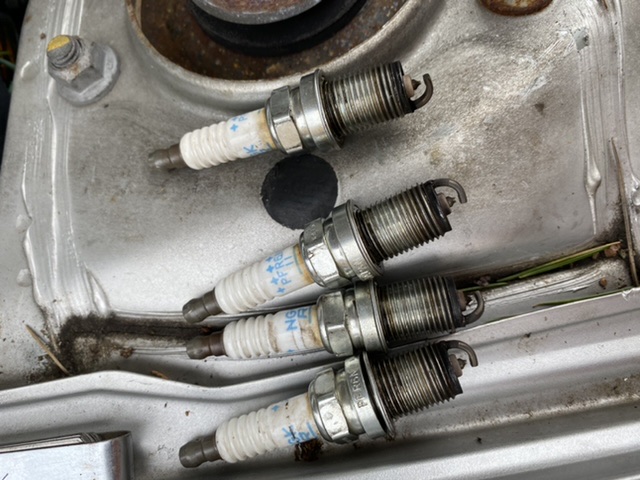 I picked up a new set of coil packs, leads and spark plugs on Saturday, and fitted them yesterday. Driving the car, the misfire & hesitation were still apparent when the car warmed up; again disconnecting the O2 sensor restored some kind of normality. Back at home I repeated the checks detailed earlier, with the same result-the new O2 sensor (which is a generic one soldered onto the old multi plug, rather than a genuine part, which are always advisable & preferable) wasn’t switching properly. 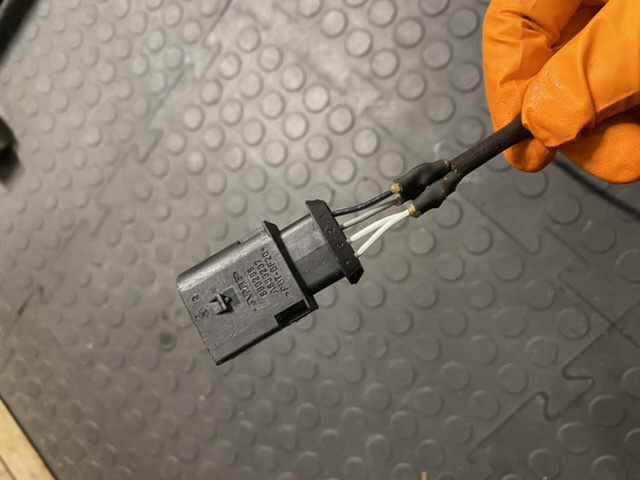 I was unable to get a new sensor yesterday (being Sunday!), but my partner’s car (a Streetwise) was a good source of a known good, genuine O2 sensor. With this fitted to the 25, the car seemed to run miles better and I’ve completed 40 miles so far without a misfire or issue. Checking the live data again confirmed a happily switching O2 sensor with a normal set of data and no faults logged. All being well, that’s problem solved!

My friend Matt had arrived by this point so we set about cleaning up the 25. It’s got a bit of surface corrosion on various suspension components underneath but is solid with no looming issues; the bodywork has a few marks but these have machine polished up well and the car presents really nicely from half a dozen paces. The headlamps have restored superbly considering their previous condition. 95% of the yellow UV tarnishing has gone with a couple of hours spent with a rotary drill attachment, various grades of wet/dry paper and some headlamp polish.

The interior has cleaned up wonderfully. Unfortunately the paint under the bonnet reacted adversely with Autoglym Engine & Machine cleaner, something I’ve never experienced before! The rest of the engine bay cleaned up OK, and we removed what felt like an entire pine tree from the scuttle panel and around the wiper linkage! 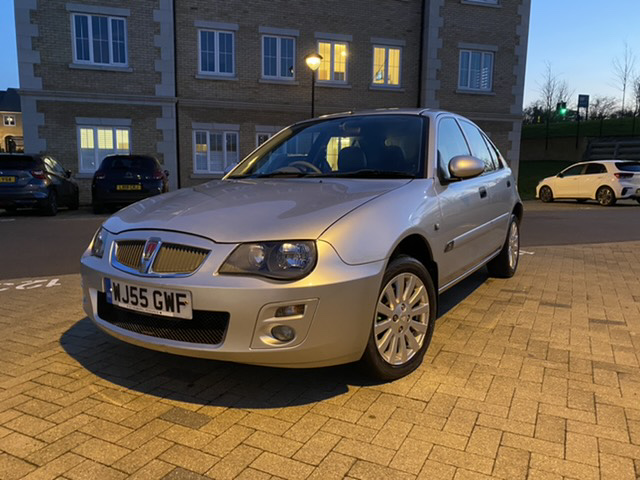 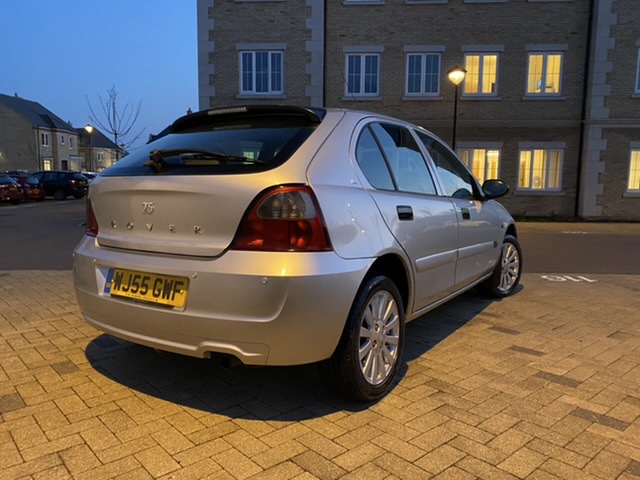 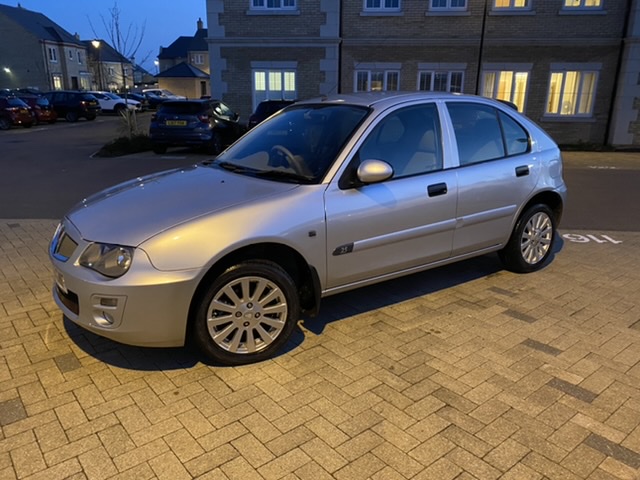 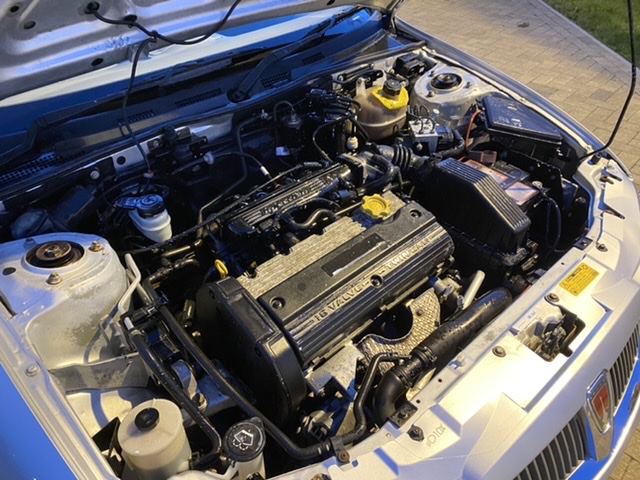 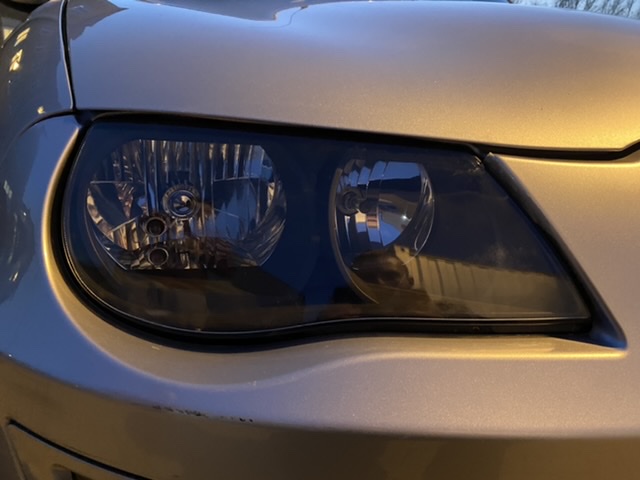 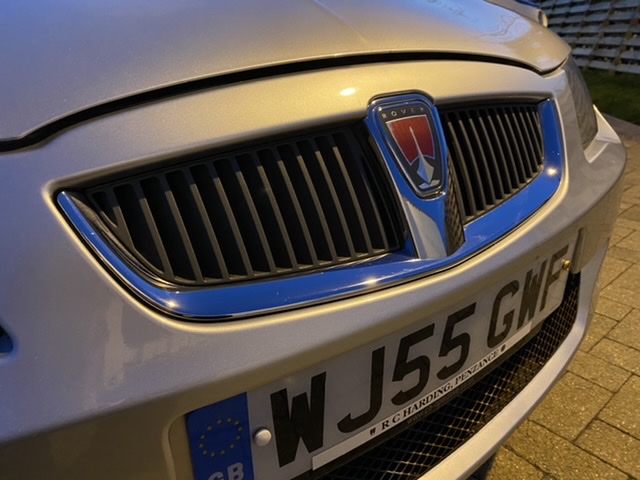 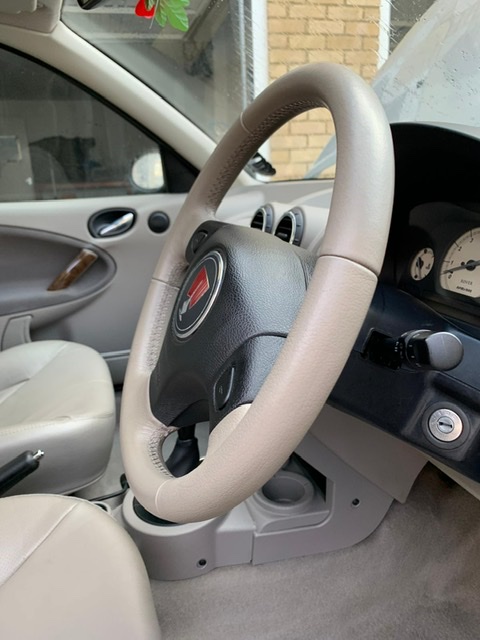 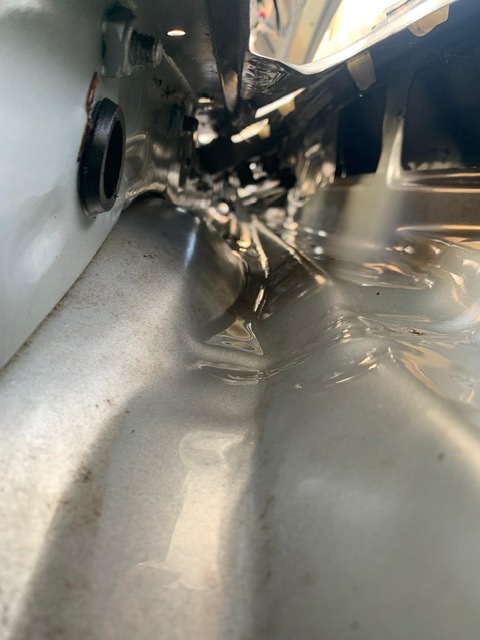 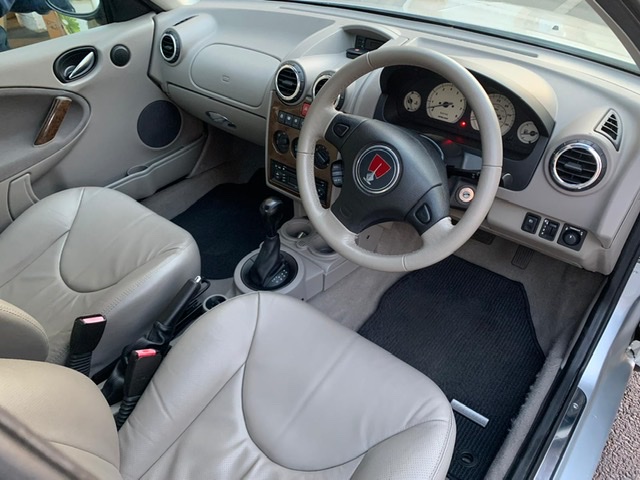 Work completed
Resolved misfire issues with replacement O2 sensor & new ignition coil packs, HT leads and spark plugs
Deep clean of interior and exterior
Adjustment & realignment of driver’s door-the top of the door was bent outwards (possibly from a break in attempt?) causing excessive wind noise and also water ingress which has dampened the carpet on the driver’s side

Work to be done
Replacement wiper blades front & rear-they are absolutely knackered!
Investigate cause of driver’s window not shutting properly-realigning and adjusting the door has helped, as has lubricating the window channels, but it’s still not perfect. I suspect the window regulator needs either adjustment or replacing
New battery clamp bolt (the car should have failed the MOT with this missing)
Full service including CVT gearbox oil replacement & brake fluid change
Investigation into why the rear washer isn’t working, the same as just about every other 25/MG ZR/Streetwise! (It’s usually a split pipe-however it can be a hugely involved job to change with removing lots of now fragile trim, so if it is I may well leave it be as it isn’t an MOT issue)
Replacement rear light gaskets to cure water ingress into the boot/spare wheel well
Four wheel alignment as the car pulls quite strongly to the left & the steering wheel is off centre

There are a couple of “advisory” items for the future on checking the car over but nothing of huge concern. The outer CV boots (aka driveshaft gaiters) are perishing but not split (a common Rover 25 item and fortunately one that costs just a few pounds in parts to rectify plus a couple of hours getting covered in sticky grease!) and the front anti roll bar links are starting to perish but have no abnormal movement (again, a few pounds from a motor factor). The front tyres are also perishing in the centres of their tread, but are still safe and legal.

I don’t need the car as such but it’s been a pleasure bringing it back up decent order! I’ll run it as my daily drive for a few months and then make a decision on what to do next.

I’ve sent a copy of this to the car’s previous owner who I hope will be delighted with how it’s come out, and also be able to see the car again at some point!
Rover 214SEI
Rover 75 Connoisseur (launch car)
Lotus Elise S
Top

That's a great save! And it's a shame the Restoration Show won't be taking place this year, because we would have had a great exhibit there with a story to go with it.

Incidentally, the dealer's name on the number plates is the dealer who sold my 220 Turbo new in 1995

Return to “The Gallery”